Adventures in MacChamonix and Other Stories...

It's brass* here and the forecast is even more brass. But, it makes for great running weather!

Here's a wee round-up of the festive adventures, then I'll get onto the boring stats and the New Years resolutions.

A week on from the 100k I ran the Carnegie Harriers Festive Forest Run it's a fast and furious 7 miles through Kelty woods. I really enjoyed it this year even though my time was much slower than my previous in 06, which I ran a week after the Round Rotherham 50 miler so I can't use that excuse! I had a last 1/4 mile sprint finish with club mate Ian Johnson where we swapped positions about 4 times cursing and swearing at each other each time for making the other work hard AGAIN before Ian nosed over the line in front and collapsed in a pile of snot... that'll teach him!! 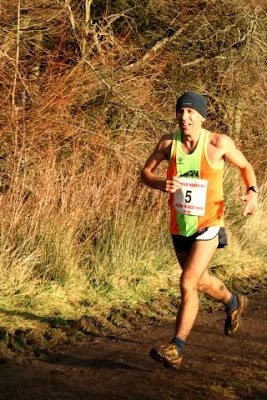 Mud and snotters at the Festive Forest

Then, after all the weeks excitement of the annual shopping festival and celebration of consumerism, beer drinking and sprout eating it was off to Scotlands very own Chamonix, yes, Tillicoultry for The Lawbreaker Hill Race. What a cracker it was too, 3 miles and 1800 feet of ascent meant it was a real quad busting climb with a ripping descent back down to the finish again, thoroughly enjoyable stuff!

Two days later I was heading up the A9 (yes Scotlands answer to the Autobahn but with speed limits... I think!) to meet Victor in another contender for Scottish Chamonix... yes, Aviemore (at least in both of these places you can buy a bag of chips* for less than a tenner*). We then parked up at Glenmore Lodge and set-off for a winter round of the Cairngorm 4000's (approx 24 miles 8000 feet climb). The thermometer in the car was reading -9 when we left and I don't think it got much warmer all day with the wind making it feel much colder on the tops, this didn't stop Victor from wearing shorts the whole way round though (since he's now a hairy a***d Teuchter !). The views were spectacular as we ran around the tops looking down the Lairig Ghru and over half of Scotland which helped to take my mind off the frozen snotters which were stinging my nostrils for most of the day. We passed a few groups of walkers who gave us strange looks as we trotted past in our trainers, and Victor in his shorts, most were very pleasant but a few were pretty ignorant, maybe we had shattered their "wilderness experience"! We had some fun descending the slopes of Ben MacDui too, the quickest way was to bumslide on the hard-packed snow, at one point I thought I had worn right through the seat of my pants and was on to the first layer of skin but no, it was just the first stages of frostbite... ouch! 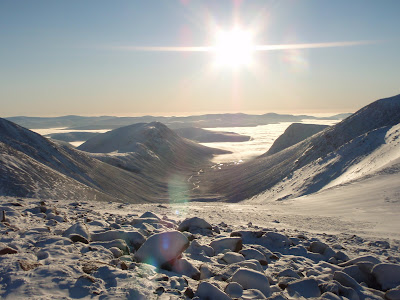 Frozen snotters in The Cairngorms

Yesterday I was back in Tillicoultry, no time for croissants in the square though, as the weather was crisp and clear and Tommy and I were out to run over the Ochils to Blackford and back. It was an amazing sunrise as we gained height up to the Maddy Moss and it was good, fast running all the way with the ground frozen solid. A good 19 miler with about 4000 feet of climb... Happy days!

Onto the stats for the year.

The training and racing mileage is an estimate because I don't record miles for taper weeks and recovery weeks so I don't get all mileage obsessed and do too much.

I've raced a lot this year, maybe I should focus on fewer races for 2009??

I'm not good at setting myself rules so lets just say I'll try and run the un-runnable bits and run faster on the runnable bits... maybe a good metaphor for the rest of my life too!

*Translations for overseas readers and sassenachs : "Brass" = very cold, old chap; "A bag of chips" = un sac de French fries; A "tenner" = quite a lot of money if you live in the UK, but not very much if you live elsewhere in the world... thanks Mr Brown...

Posted by The Sunday Adventure Club at Sunday, January 04, 2009

what a great way to end/start the year. that is some serious mileage/ascent that you've clocked up, very impressive. we're off to glenmore lodge in a few weeks, hope the conditions are the same.